During his first two weeks back, my brother, the demolitions expert, plied me with photos of the carnage and mayhem wreaked by his platoon. Fifteen memory cards worth of bizarre and disturbing photos — half-naked soldiers dancing in the desert, a severed goat’s head in a noose, Marines dressed in traditional women’s clothing found following a house raid.

I wanted to hit him, banish him, to create a giant dent in his soul. But he wouldn’t care, wouldn’t budge. This is what the Marines have trained him to do — warp, destroy, and believe it is for good. … 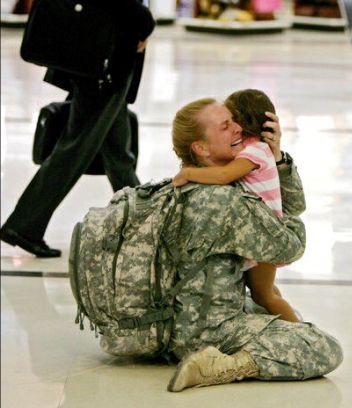 …findings about violence among our ancestors and primate cousins have perpetuated what anthropologist Robert Sussman from Washington University in St. Louis, Missouri, calls the “5 o’clock news” view of human nature. Just as evening news shows follow the dictum “if it bleeds, it leads”, so many accounts of human behaviour emphasise conflict. However, Sussman believes the popular focus on violence and warfare is disproportionate. “Statistically, it is more common for humans to be cooperative and to attempt to get along than it is for them to be uncooperative and aggressive towards one another,” he says. And he is not alone in this view.

Army commanders are failing at the day-to-day task of monitoring troubled young soldiers in their barracks back home, which is helping push suicides to record numbers, the head of the Army’s suicide task force says.

More than half of those surveyed say generally their children have coped well or very well with a parent who has gone to war. But one in four say the child has coped poorly or very poorly, and a third say the child’s grades and behavior in school have suffered.

Nearly 900,000 troops with children have deployed to war since 2001, and the Pentagon estimates that currently 234,000 children have a mother or father at war. The survey last year had a margin of error of +/-4 percentage points says Barbara Thompson, head of the Pentagon office of Family Policy/Children and Youth.

The Pentagon is “very concerned” about the effects of multiple deployments, she says. Children have classmates who have lost a parent, she says, “it’s in their face that it could happen to me.”…

And think of those whose parent comes home missing a foot, or part of a brain, or a personality…

Goals of the Center

BERLIN, May 28 — The Obama administration’s push to resettle at least 50 Guantanamo Bay prisoners in Europe is meeting fresh resistance as European officials demand that the United States first give asylum to some inmates before they will do the same.

Rising opposition in the U.S. Congress to allowing Guantanamo prisoners on American soil has not gone over well in Europe. Officials from countries that previously indicated they were willing to accept inmates now say it may be politically impossible for them to do so if the United States does not reciprocate.

I just got an online petition from the Union of Concerned Scientists, via a friend. They want me to help convince the Senate that they should ratify the Nuclear Arms Nonproliferation Treaty.

I suppose petitions are better than nothing, but this one ends with a line that makes me question the entire UCS, at least when it comes to their understanding of syntax.  Taken literally, it would make you question their concept of reality as well.  Maybe it has something to do with quantum theory.

These steps will reduce the likelihood that more nations and terrorists will acquire nuclear weapons and make the world safer.

Next thing you know, we’ll have a petition by the Union of Concerned English Teachers.

BTW: If you really want to influence your senator, write a snail mail letter (I am). Then they know that you really care, as opposed to taking 90 seconds of your valuable time to do an online petition that anyone could have done in your name. You could even print out the scientists’ letter and mail it. It’s like the difference between an e-card and one from Hallmark. Really.

Shot in black-and-white, and set in a north German village on the eve of World War One, The White Ribbon explores how an oppressive upbringing can shape the way children act and think.

Remember: he wasn’t tied up and helpless, under the total control of people who he was convinced hated him.  Nonetheless, now he agrees — it’s torture.

Only trouble with this is, now that they’ve seen how to do it, a bunch of kids will be trying it. Look for it to appear in frat houses, too.

KATHMANDU (AFP) — Retired British Gurkha soldiers in Nepal on Friday hailed as “historic” a British announcement that the veterans can settle in Britain.

The British government said on Thursday all of the Nepalese fighters who retired before 1997 and had served at least four years with the British army could now apply for residency.

“This is a historic achievement for all Gurkhas,” Jit Bahadur Rai, treasurer of the Gurkha Army Ex-Servicemen?s Organisation, told AFP.

Gurkhas who retired after 1997 — when their base was moved from Hong Kong following the territory’s return to China — already had the right to settle in Britain and more than 6,000 have done so….

George J. Tenet, the C.I.A. director who insisted that the agency had thoroughly researched its proposal and pressed it on other officials, did not examine the history of the most shocking method, the near-drowning technique known as waterboarding.

The top officials he briefed did not learn that waterboarding had been prosecuted by the United States in war-crimes trials after World War II and was a well-documented favorite of despotic governments since the Spanish Inquisition; one waterboard used under Pol Pot was even on display at the genocide museum in Cambodia.

They did not know that some veteran trainers from the SERE program itself had warned in internal memorandums that, morality aside, the methods were ineffective. Nor were most of the officials aware that the former military psychologist who played a central role in persuading C.I.A. officials to use the harsh methods had never conducted a real interrogation, or that the Justice Department lawyer most responsible for declaring the methods legal had idiosyncratic ideas that even the Bush Justice Department would later renounce.

The process was “a perfect storm of ignorance and enthusiasm,” a former C.I.A. official said.

In Adopting Harsh Tactics, No Inquiry Into Their Past Use – NYTimes.com

And, of course, no one volunteered to try them out.

Reporting from Washington — Prisoners could be kept awake for more than a week. They could be stripped of their clothes, fed nothing but liquid and thrown against a wall 30 consecutive times.

In one case, the CIA was told it could prey on a top Al Qaeda prisoner’s fear of insects by stuffing him into a box with a bug. When all else failed, the CIA could turn to what a Justice Department memo described as “the most traumatic” interrogation technique of all — waterboarding….

Men sent to Iraq or Afghanistan for two, three, or four tours of duty return to wives who find them “changed” and children they barely know. Tens of thousands return to inadequate, underfunded veterans’ services with appalling physical injuries, crippling post-traumatic stress disorder (PTSD), and suck-it-up sergeants who hold to the belief that no good soldier seeks help. That, by the way, is a mighty convenient belief for the Departments of Defense and Veterans Affairs, which have been notoriously slow to offer [or pay for] much of that help….

Digital Dharma
Create a free website or blog at WordPress.com.